Below is an update on the progress we are making on rehabilitating the alpha prototype.

Mark and I have been working on the prototype most every weekend since April. There are several areas in the original prototype where the wiring needed improvement. Don’t get me wrong, the guy who did the original electrical layout, (Stew Roberts) did a masterful job considering the money and other resources we had to work with. But Mark felt it was a good idea to replace some of the old wiring with heavier gauge wire as well as update a few of the electrical components. For you nerds out there, here’s what we did, for anyone else, skip the next few paragraphs and save yourself a few moments of life reading about DC electrical work.

There are two, 3-phase AC flywheel generators, wired in parallel up to 2 bridge rectifiers. Previously both rectifiers were wrapped with rubber insulation and wired in with very thin gauge wire. The current from the generators used to feed into an input into the BCM, (battery control module), with a double tap of one wire going to high side of the traction battery 120V input.  Now the flywheel generators have their own dedicated line to the 120V system, (basically the power coming from the generators just goes into the overall electrical system and not into any one specific place – ie the 12V, or 120V, or electronics, etc. and it has to overcome 120V to get into it). Possibly in the production iteration of the vehicle we will dedicate generator power.

Mark re-wired the rectifiers with heavier gauge wire, put them together in a small electrical box and we bolted them to heat sinks, (for heat dissipation). The steering wheel as you can see has been populated with many buttons. Thes ewill be for turn signals, horn, pedal resistance level, actual/virtual terrain and flashers.

That large electrical box overflowing with wires is the Body Control Module that Mark put together. It contains, among other components, an Arduino and another circuit board, which will be processing pedal acceleration, servo control of Nuvinci transmission, (for pedal resistance), blinkers, all lights, all sensors, speedometer, etc.

Okay, that’s over. Did you make it?

We also fired up the whole system and it’s functional.

Next time we get together, we’ll be working on the brake lines, connecting the lights, blinkers, installing a sensor  for the speedometer, an incline/decline sensor when the rider wants the vehicle to mimic actual terrain, trying out a simple display, connecting a fwd/rev switch for the motor, installing 2 ventilation fans and a new seat.

Our plan is to be ready for testing end of July. 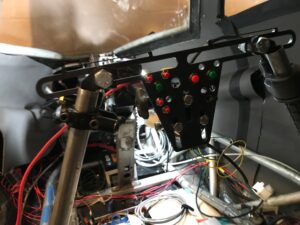 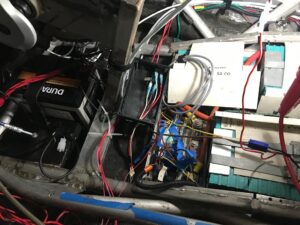 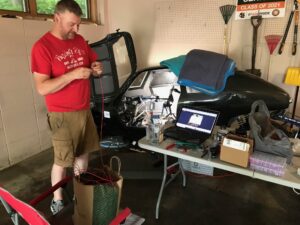 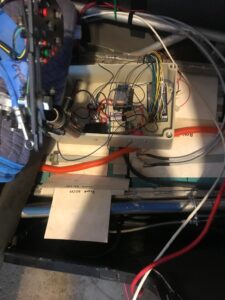 Road Rash 1-22 – Snow can teach us something about aerodynamics

Road Rash 1-22 – Snow can teach us something about aerodynamics 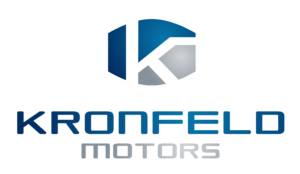